The vast majority of US States and Canadian provinces require that massage therapists be licensed in order to practice massage therapy as a paid profession, and the requirements for each state are different. Most states require a minimum of 500 hours of training. One highly respected guideline (the Entry-Level Massage Education Blueprint) recommends a core curriculum of 625 hours. The average massage therapy training in the US is between 642 and 697 hours.

Most states (except Hawaii) that license massage therapists require a passing score on the Massage & Bodywork Licensing Exam (MBLEx) or one of two exams formerly (no longer) provided by the National Certification Board for Therapeutic Massage & Bodywork (NCBTMB), and maintaining a license in most of those states requires continuing education hours.  This exam only needs to be passed once, and then the passing score can be used for licensing in all states that require it.  From 2011-2019, PCAB students had an average yearly pass rate on the MBLEx over 90%, which is 20% higher than the national average. One can signup for the MBLEx exam on the website for the Federation of State Massage Therapy Boards.

In Hawaii, which does it differently than most states, one needs 570 hours of coursework in massage in order to qualify to sit for Hawaii’s own exam.  Once this exam is passed, one only needs to pay for a license to practice, which is good for 2 years and can be renewed without any continuing education credits.  Massage trainings in Hawaii are approved through one of two routes: either Apprentice Programs approved by the Department of Commerce and Consumer Affairs (most common) or Massage Schools through the Hawaii Department of Education (which is what PCAB utilizes). Only those approved by the DOE are allowed to call themselves schools, and these programs are the ones most similar to programs on the mainland since most of the hours are in a classroom setting, not in an apprenticeship setting (which is unique to Hawaii).  Note that many states (including CA and WA) do not accept hours from apprentice programs, so if one wants to be licensed outside of Hawaii, one needs to attend a DOE-licensed school such as PCAB.

The 808-hour program at PCAB meets or exceeds the hour requirements for most states (except NE and NY).  This means that the hours acquired at PCAB can be transferred to your state so you can qualify to take the licensing tests in those states.  Most of our students who are now licensed massage therapists are from the states of HI, OR, CA, WA, CO, NC, and PA.

If you have any questions about licensing, please contact us. 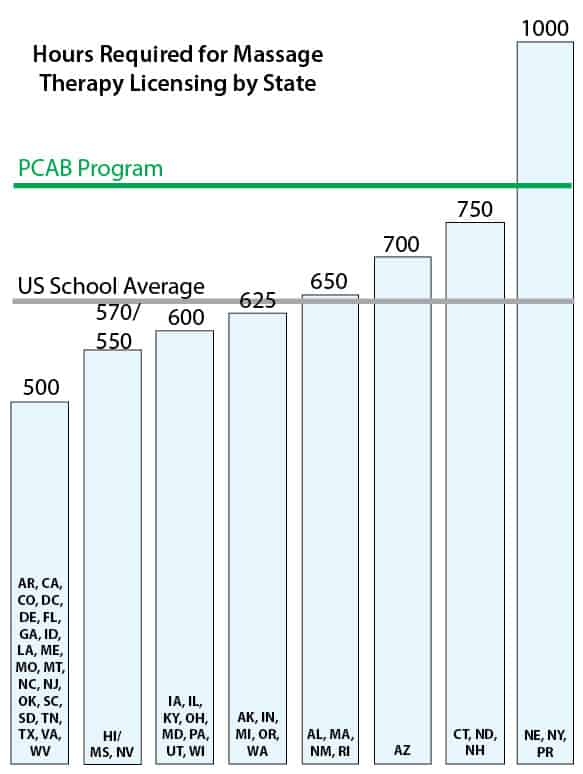